11 Signs and 6 Causes of a Vitamin D Deficiency

The benefits gained from spending time outside are boundless. Not only do the great outdoors help relieve stress, keep you active, and improve focus, but getting outside can also help you get your daily dose of vitamins, specifically vitamin D, and help prevent a vitamin D deficiency.

Vitamin D, a.k.a. the sunshine vitamin, is a steroid vitamin or fat-soluble prohormone produced when your skin is exposed to sunshine or, rather, the ultraviolet B (UV-B) radiation the sun emits.

The Role Vitamin D Plays in the Body

Vitamin D is one of many vitamins our bodies need to stay healthy and carry out essential functions.

It is most well-known for its role in supporting bone health and aiding in the absorption of calcium and phosphate from the GI tract. But, your body needs vitamin D for other functions too. For example, muscles need it to move, nerves need it to carry messages between the brain and body, and the immune system needs vitamin D to help fend off bacteria and viruses that can lead to illness.

Are You Getting Enough Vitamin D?

Unfortunately, despite the importance of vitamin D, many people simply are not getting enough of it. In fact, vitamin D deficiency is very common. It’s estimated that about 1 billion people worldwide suffer from inadequate levels, most of which are unaware until they start experiencing health issues as a result. 1

So, who is most at risk for vitamin D deficiency?

For many, it may be a surprise to find out it’s not just children at risk. You see, traditionally, vitamin D deficiency has been associated with rickets, a disease that only occurs in growing bones, in which the bone tissue does not properly mineralize, leading to soft bones and skeletal deformities.

Yet increasingly, research is revealing the importance of vitamin D in protecting against a host of health problems in people of all ages. Still, some people are at a higher risk than others, including:

Signs of a Vitamin D Deficiency?

Although symptoms of vitamin D deficiency are generally subtle and not easily recognized, they can have a significant impact on your quality of life.

Here are 11 signs and symptoms of vitamin D deficiency:

There are many causes of feeling tired, and vitamin D deficiency may be one of them. Low vitamin D levels are often overlooked as a potential cause; however, studies have found a strong connection between low vitamin D and self-reported feelings of fatigue. 2

A growing number of studies point to vitamin D deficiency as a risk factor for heart attacks, congestive heart failure, peripheral arterial disease, strokes, and the conditions associated with cardiovascular disease, such as high blood pressure and diabetes. 3

One of the most important roles for vitamin D is keeping your immune system strong. This can help you better fend off viruses and bacteria that cause illness. 4 If you often become sick, especially with colds or the flu, low levels of vitamin D may be a contributing factor. 5,6

Vitamin D is best known for its ability to help maintain bone health. As a result, bone pain may be a sign of inadequate vitamin D levels. Studies have found that people with arthritis, muscle pain, and chronic widespread pain tended to have lower levels of vitamin D compared with people without these conditions. 7

Reasons for muscle pain can often be hard to pinpoint. Since the vitamin D receptor is present in nerve cells called nociceptors, which sense pain, researchers believe vitamin D may be involved in the body’s pain signaling pathways, which could play a role in muscle as well as other chronic pain. 8

Vitamin D receptors are found throughout the brain and play a large role in making memories. One study has shown that in adults 65 and older, those with insufficient levels of vitamin D performed worse on tests of executive function (such as reasoning, flexibility, and perceptual complexity), attention, and processing speed compared with those who had optimal levels of vitamin D. 13

Other research has shown that older adults with low levels of vitamin D experienced memory loss faster than those with healthy levels. 14.

Vitamin D plays a crucial role in calcium absorption and bone metabolism. Many older people who are diagnosed with bone loss believe they need to take more calcium. However, they may be deficient in vitamin D as well, as research has found a strong link between low vitamin D levels and low bone-mineral density. 21

Slow healing of wounds after surgery or injury may be a sign that your vitamin D levels are too low. One study suggest that vitamin D increases the production of compounds that are crucial for forming new skin as part of the wound-healing process. 22 It’s also been suggested that vitamin D’s role in controlling inflammation and fighting infection is important for proper healing. 23 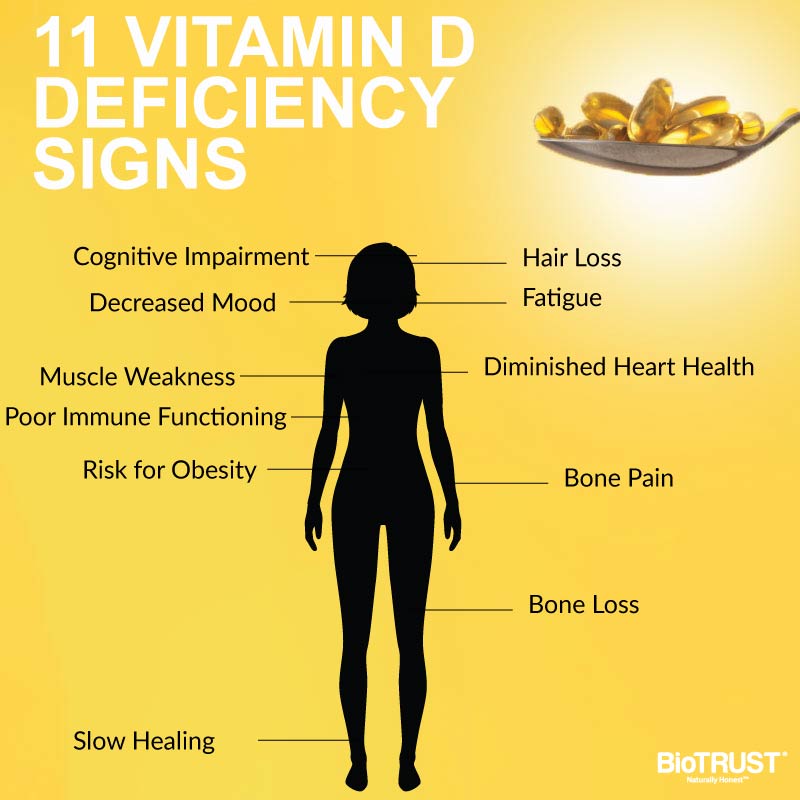 How to Get Enough Vitamin D

Clearly, vitamin D is an important vitamin, and inadequate levels can take effect on several systems throughout the body. The good news is, determining your vitamin D levels only takes a simple blood test called 25-hydroxyvitamin D. The measurement is nanograms per milliliter, and it’s generally recommended to keep your levels between 30 and 60 ng/ml.

Although you can find vitamin D in fatty fish, fortified orange juice and milk, sunlight is the strongest natural source for vitamin D. At a minimum, you need to spend about 15 minutes in the sun exposing the face, arms, and legs several times per week without sunscreen, since sunscreen limits vitamin D production.

Nevertheless, health experts recommend using sunscreen with an SPF of 15 or more when you’re out in the sun for more than a few minutes. So alternatively, those with low vitamin D levels may also choose to supplement vitamin D into their diet.

How to Supplements Vitamin D Safely

When supplementing with vitamin D, there are several other aspects to consider. First off, it is crucial to simultaneously take the right type of vitamin K, too, to escalate certain benefits. This is because experts now believe that vitamin D and K are especially important for a healthy heart and bones.

For example, when vitamin D stimulates increased absorption and retention of calcium, vitamin K performs the essential function of directing calcium where to go. It helps deposit calcium where it is needed, such as your bones and teeth, and keeps it away from undesirable places for calcium, such as the joints, blood vessels, and kidneys.

Vitamin K is also an important nutrient, essential to bone and heart health, including supporting healthy, flexible arteries and more. In fact, research shows that higher intakes of vitamin K have been associated with better heart, circulatory, and overall health, and well-being. Unfortunately, most people aren’t getting enough of this nutrient, either—research shows only 1 in 3 people are consuming an adequate amount of vitamin K in their diets. 24,25,26

As for the right form of vitamin K, always look for vitamin K2, and more specifically, its most studied and effective forms of MK-4 and MK-7, which are very well-absorbed by the body, and research shows they can be very effective at increasing blood levels of K in the body.

Yet all these “rules” about vitamin D can be confusing and frustrating. That’s why here at BioTRUST one possible solution is simple: the high-potency vitamin D3 supplement Sol Joy™.

Sol Joy meets ALL the requirements for a premier-quality vitamin D that delivers the benefits you want in one easy-to-swallow capsule.

Whether you get your vitamin D from sunshine, the foods you eat, or the supplements you take, it clearly has numerous important roles in your body. Vitamin D is, however, also a fat-soluble vitamin, and you can get too much of a good thing.

If you are getting your vitamin D from the sun, that isn’t a concern as your body is able to adjust the amount it creates from sunlight (though you’ll also want to protect your skin from photoaging and other damage). If, however, you choose to get your vitamin D via supplementation, it’s a good idea to get your blood tested at least yearly to ensure you’re maintaining optimal amounts.