Where Does Fat Go When You Lose Weight? (surprising)

How does fat loss actually happen? Where does the fat go? When we lose weight, where does it go? Do any of these questions sound familiar…

If you’re thinking one—or more—of the above, I don’t blame you. In fact, according to a recent study published in the British Medical Journal, researchers found that health professionals (like doctors, dietitians, and personal trainers) think along the very same lines.1 Here are the results of a survey the researchers took: 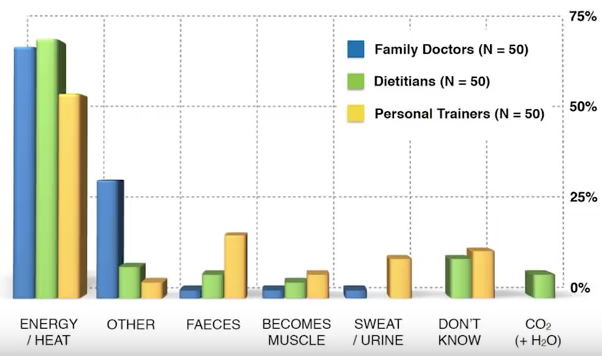 So, where does fat go when you lose weight? Before we answer that question, let’s take a step back.

Calories In Versus Calories Out

Ever heard of the first law of thermodynamics (also known as the law of conservation of energy), which basically states that energy/heat can neither be created nor destroyed? Well, our bodies abide by that law. In fact, that’s where the ol’ “calories in versus calories out” (often referred to as “CICO”) mantra comes from, and it basically says that bodyweight is a function of energy balance.

In other words, you gain weight when energy in exceeds energy out, and you lose weight when you expend more energy than you consume. For what it’s worth, the energy balance equation is a constantly fluctuating depiction of the principle of energy conservation.2 Also, you can gain or lose weight regardless of the composition of your diet (e.g., low carb, low fat, and anything in between).3

Of course, the body’s main storage form of fuel—and “extra” weight—is fat. And the body is quite adept at storing “extra” dietary fat as body fat, and it is completely capable of converting “extra” carbohydrate (and to a lesser degree, “extra” protein) into triglycerides and storing them as body fat.

One other thing that’s important to point out is that we are in a dynamic state of energy imbalance. In other words, under normal conditions, there may be times when you’re in an energy surplus and other times when you’re in an energy deficit. It’s only when the scale is tipped in favor of energy in or energy out consistently over time that weight gain or loss, respectively, ensues.

With a better understanding of CICO, you can see why the simplest recommendation for weight loss is often “eat less, move more,” which is just another way of saying reduce energy in and increase energy out. (Of course, we know that weight loss is WAY more complex than that.) For all intents and purposes, when we’re talking about losing weight, we’re talking about losing stored body fat (and holding onto precious fat-free mass, like muscle, bones, organs, etc.), which look a little something like this: Because weight loss usually gets loosely translated as “burning” more fat and “burning” more calories, most people believe that fat is converted to energy or heat when it’s “lost.” However, scientists argue that this violates the law of conservation of mass.1 Yes, it’s true that the body oxidizes (“burns”) stored fat and releases energy (stored in the chemical bonds, which are represented by the dashes in the image above) to meet the increased demand.

But, as you can see in the picture above, stored fat also contains a BUNCH of carbon (C) and hydrogen (H). In fact, the average stored triglyceride contains about 55 C and 104 H! What happens to them? So, let’s ask the “burning” question again: Where does the fat go when you lose weight? For the most part, it literally vanishes into thin air! Yes, you read that right. You lose fat through your breath. Essentially, this is metabolism in a nutshell. In fact, one tool scientists commonly use to measure metabolic rate—and find out how many calories are burned during an activity, over the course of the day, etc.—is called indirect calorimetry, which measures the consumption of oxygen and the production of carbon dioxide.

Do you know what else that means? It means:

This last point shouldn’t be lost. Even though it pains me to say it, I suppose it is true that some fat is “lost” as sweat. More specifically, about 10% or so of the fat that’s lost is excreted as water. This is important to mention because it means fat is a source of metabolic water.

And for many mammals, fat is a major source of metabolic water, which is used by many animals to survive periods of water shortage. Whales, for example, obtain much of their water from burning fat. Meanwhile, desert animals (like the ol’ sand rat, camel, and oryx) have high body fat, which they use to generate water during times of need.

What the heck does this have to do with us? Basically, storing more fat is a means for providing metabolic water and protecting against water shortage. Some researchers suggest that this built-in survival mechanism may in part explain why some people have so much trouble losing fat.4 And it’s a darn good reason to make sure you’re drinking enough water and consuming plenty of low-energy-dense foods (like vegetables and fruits).

You May Be Losing More Than Fat

Since we’re talking fat loss, let’s take a minute to mention persistent organic pollutants, or POPs for short, which are potentially harmful compounds (pesticides and environmental contaminants, for example). POPs are “lipophilic,” which means they have a tendency to accumulate in fat tissue, and generally speaking, obese folks have higher levels of POPs than lean people. When fat is lost—like described above—these POPs increase significantly in the bloodstream.

Studies have shown that POPs have been linked to various endocrine, immune, nervous, and reproductive system issues. On one hand, body fat plays a protective role against the effects of POPs, which it sequesters. However, when fat is lost and these POPs are released into the bloodstream, it’s possible that may explain some of the unexpected adverse effects sometimes experienced after weight loss.5–7 There’s a lot that we don’t know on this topic, but it’s something worth mentioning. If you’ve lost a lot of weight and experienced unintended consequences, I’d love to hear your feedback.

Simply put, losing weight involves “unlocking the carbon stored in fat cells.” This reinforces the common advice to “eat less, move more,” which may be more appropriately stated as “eat less, exhale more,” although hyperventilating won’t do you any good.

Being more active and exercising more—and doing so consistently—can help swing the balance in favor of weight (carbon) loss. (There’s a reason why you breathe more when you’re moving and grooving.) However, exercise alone is rarely enough, and that’s why it’s so important to complement it with a healthy eating plan that helps you reduce your carbon load.

2 Surprising Keys to Shedding Weight (and Keeping It Off)

4 Belly-Blasting, Healthy Carbs (add these to your menu today)