“Do these pants make my butt look big?” That’s just one of the witty quips from BioTrust Shape Up Challenge winner Howard Hedlund, who (since May 2017) has gone from 412 to under 200 pounds and quite literally become half the man he used to be! We are SO proud of Howard. He’s not only made a life-changing transformation, he’s been a magnet in our VIP group, literally attracting and inspiring many others and springing them to action and life-altering health changes of their own. In this episode of BioTrust Radio, we sit down with Howard, who shares a transparent view into the bleak, scary reality of being morbidly obese and the tools, tricks, and tactics he’s used to overcome obstacles and drop over 200 pounds in 17 months. Enjoy!

Or Listen Here (press play below): Products Mentioned in This Episode:

“Since I started this journey with BioTrust in May of 2017, my goal and mantra have been to become ‘Less than half the man I used to be!’ I have battled obesity since childhood, and to be honest, I consider myself a food – especially sugar – addict. With the power of my arsenal of BioTrust products and with the help and support of the incredible BioTrust Community and Coaches, I can proudly and confidently say that I have passed that milestone – going from over 412 pounds now down under 200. To say that I’m thrilled would be an understatement. The road will offer many opportunities to stray, but I know now that I must continue: Onward, Forward & Downward!”

Here’s what you’ll learn in this episode:

What do you think? We’d love to hear your feedback. Are you struggling in your health and weight loss journey? Let us know in the comments below. We’re here to help! And remember… you’re just one decision away from better health and a better body!

Resources from This Episode: 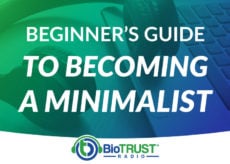